Oh man, oh man. I was in Memphis from Sunday until Tuesday, and it was a decidedly depressing visit with my husband's family in a town that I really just don't like, not even a little bit. After I finished "running errands" yesterday, I actually pulled the car over and parked in a Best Buy parking lot for an hour with Tessa napping in the backseat. I wanted to finish Janet Fitch's White Oleander, and I didn't want to return to the depressing just yet. That's saying a lot--considering that it's sort of depressing to be parked in a Memphis Best Buy parking lot anyway. 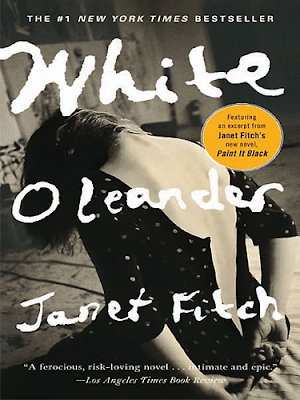 My new girlfriend Kimberly Novosel recently told me that White Oleander was one of her very favorite books. Now I feel the same. It was such an extraordinary story and so beautifully and enviably written that, while I read it, the narrative ran parallel in importance to my own life. I was living my life and Astrid's life at the same time. That's my favorite thing about really good books. After I wash my face and brush my teeth and climb into bed at night, or while I'm waiting at the car wash, there's another dimension I can live in for awhile.

I'm on a good streak with books right now--starting with the memoir The Glass Castle. Good book streaks always make me realize that average books aren't worth reading. Or, not even average books but maybe books that other people love but that I just don't. For instance, I've tried twice to read A Heartbreaking Work of Staggering Genius, but I give up. I give up. It's just not happening for me.

Are y'all on Good Reads? I've been using it to keep track of my reads and really enjoy it, though I get sort of intimidated by all the smarty pants reviews on the site.
Posted by Ellen Mallernee Barnes at 6:18 PM