Stuff I Made: Beach Bag. 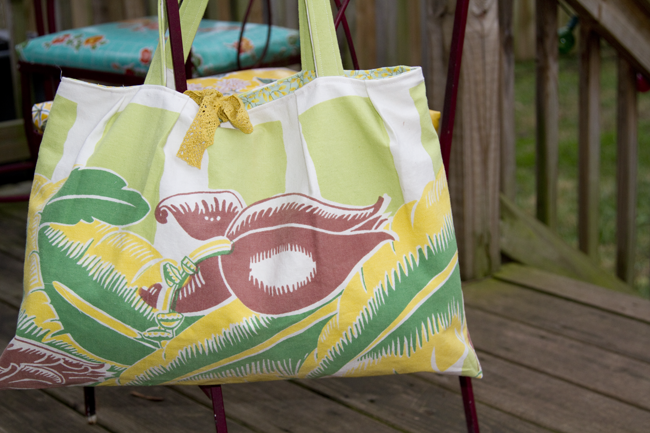 We've had a lazy little weekend; we had friends over for dinner on Friday night, and then right before I was going off to bed that night I went in to Tessa's room to check on her, and she was drenched in puke. This was followed by another (almost) 24 hours of puke-drenchiness. Nekos actually got puked on the next day, all down his shirt and into his lap. Needless to say, all other plans went out the window and the three of us spent yesterday on the couch watching Yo Gabba Gabba (while Tessa was still awake) and Boardwalk Empire (after she was sleeping). The only good thing about a sick baby are the extra cuddles, even though those cuddles smell vaguely like puke that even the coconuttiest shampoo can't out coconut. Poor kid. She's had a rough go of it lately.

Today Tessa was all better, and Nekos and I were relieved that we hadn't caught her bug. I got started on this beach bag in the morning and was surprised that I was able to finish it in a couple of hours while Tessa sorted through my ribbon box, unspooled my purple ric-rac, and dumped out a baggy of rosettes to count ("Two-three-four-eight," she always says, no matter what she's counting). A friend dropped this island-y vintage fabric by for me last week; I think it had been her grandmother's, and it was spot-on for making a beach bag/pool bag/big carry-all (in the dead of January, I know). To make this, I used the "Mama's Bag" pattern also included in the Handmade Home book, but I made mine several inches wider and taller so there would be room for a couple of beach towels. This project was super gratifying because it's really sturdy and fun and foolproof. I want to make another one, like, now--a smaller one to bop around with. Next time I'll include pockets. And, also, I have to make this "doggie bag" for Tessa.