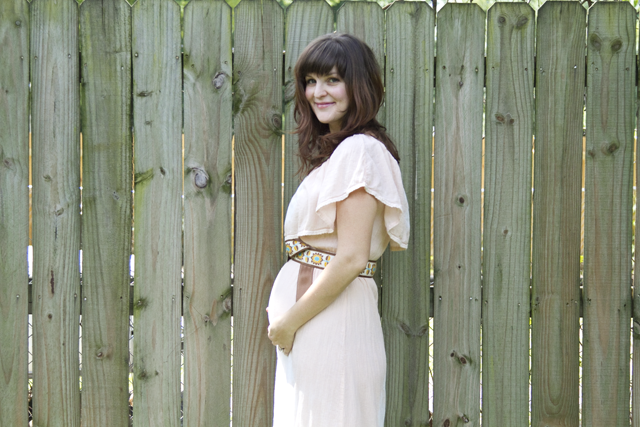 I wish this status update on my pregnancy was more positive, and I wish so badly that I would be one of those women who love! being! pregnant! but I'm so not. The only thing I really like about it is not having to diet (great glugs of half and half in my coffee!) and feeling the baby move (endlessly magical). Otherwise it's a time of such great transition that I feel uneasy and not myself and also kind of trapped in my body and my life and by the huge decisions we've made. I love being a mom, but this part of it doesn't agree with me.

Physically: Compared to the first four months, I feel terrific physically. I get the occasional wave of nausea when my stomach's empty, but nothing like it was. I'm still really tired, and take naps several times a week when I can. I'm also dealing with insomnia, but it's a different kind than when I wasn't pregnant. I usually don't have much trouble falling asleep, but then I wake up having to pee (of course), realize I'm hungry and go downstairs to have a bowl of cereal, and then stay up reading so that I'm often up for an hour or so in the dead of night.

I've gained 8 lbs. so far, and it's really picking up speed now because I'm suddenly hungry all day long. I gained 25 lbs. with Tessa, and I'm hoping to stay under that with this pregnancy so I have less work (and less glum staring in the mirror) to do post-partum. In most outfits right now, I just look like I have a fantastic beer gut so I'm having plenty of moments when I stand in front of my closet, feel like I have nothing to wear, and end up putting on something that makes me feel sloppy. There's only one bra that fits now, and it's beige. I just ordered two pairs of skinny maternity jeans from ASOS yesterday, though, so I'm hoping they'll help me out. 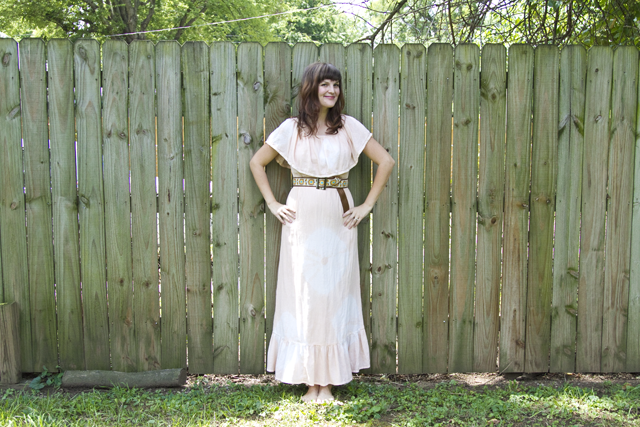 Emotionally: This part has been tough for me, as I've been struggling with the blues and some panic attacks during this pregnancy. Not can't-get-out-of-bed depression or anything like that, but a general melancholy and some loneliness. And after I have a panic attack, there's a 24-hour panic attack hangover that follows, wherein I feel bad about myself for being so anxious, and sad and scared that my body reacts to anxiety like it does.

I'm worrying plenty about the postpartum period, which was awful and scary for me in 2010 in the weeks after I had Tessa. What's helped is that I've started seeing a therapist who specializes in post-partum issues, and we're working on some things, including a plan for after the baby is born so that I get lots of TLC and am well taken care of until my hormones get back to something like normal. I am still taking my anti-depressant, but I can't take much else so it's been a good time (if not the most pleasant time) to deal with some issues I've been squirreling away for a rainy day. None of this has been pleasant for Nekos either, and I feel even worse about that.

On a positive note, I'm in a little bit less of a hurry to get through this pregnancy than I was the first time. Now I know what to expect--I actually loved giving birth and there's less mystery about what the baby will look like--and I know how fast time goes so I'm trying to be in this moment, in this pregnant pause. This may very well be my last pregnancy. Baby Girl: I've been feeling her flutter for several weeks now, but only last week did I begin to really feel her kick so that if my hands are pressed against my stomach they'll jump when she squirms around. This is my favorite part of pregnancy, and generally the only time during the day when I sit down and sit still and meditate on the pregnancy and feel grateful for the little flame that's been lit inside me.

I also feel so much more connected to the baby now that I know she's a she. I can't tell you how excited I am to being having another girl and what a relief it is to be walking (strolling? babywearing?) into familiar territory. I'm feeling the first stirrings of love for this new child after such a difficult pregnancy. I know she will be worth every bit of it, and I mean it.

The baby weighs about a pound now and is in grow mode, set to get bigger by leaps and bounds in the weeks to come. We are close to a name for her. There's one we really like, but are we obsessed? And there have been plenty more that we liked a lot, too, but have ruled out as too unique. I don't want to plaque our baby with a too-unusual name that may not suit her personality.

How Tessa's Dealing: Tessa is pretty confused about the baby on the way. She is convinced that she's pregnant and that there's a baby inside her tummy and she reminds us every day. I get it. Pregnancy is weird. It's weird to me so I'm sure it's hard for a two-year-old to comprehend. But I have a feeling that as social, assertive, and helpful as Tessa is, she's going to be a dream of a big sister.

I can't say enough about how much I love and enjoy Tessa's company right now. She is bright and cracks me up and she's energetic and heaping love on me, more love than I've ever felt from her. After two years or so of giving and giving and giving it feels so beautiful to be receiving love back from her. At night when I lie in her bed with her before she falls asleep, she rubs my arm very maternally and puts her face just inches from mine. Looking, unblinking, into my eyes she says, "I so much love you, mama," and her breath is earnest and sweet. This is the part of parenting that's addictive; it's the kind of intensely fulfilling hit of pleasure that can't be achieved any other way. The kind that makes people like me, people who are scared and overwhelmed, keep having babies.