On Working from Home with 2 Kids. 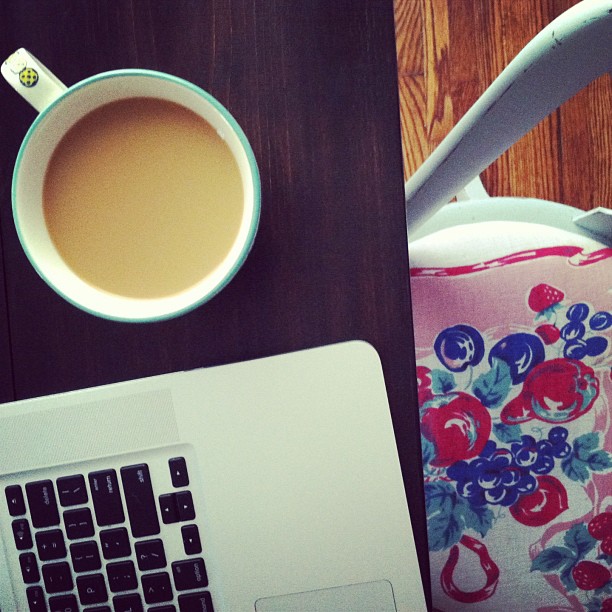 I've been doing freelance writing and marketing from home for the past three years—since right after Tessa was born in March 2010—but a few months back I all of a sudden felt the need to return to an office. I romanticized the idea of getting dressed in the morning, working a 9 to 5 surrounded by adults, and then coming home and focusing on my babies and my husband and spending the weekends with them entirely. As it is now, I usually work during nap times and at night, on the weekends, and whenever else I can squeeze in an email or a blog post. I seldom feel like I'm doing a good enough job in any of my roles because there are never enough hours in the day to do all the things as well as I want to do them. And as someone who has always taken a lot of pride in being hard-working and productive, being so scattered and working in fits and starts doesn't sit well with me. It's still hard, every single day, to not be able to be exactly the kind of mom and wife and housekeeper and friend and employee that I want to be. But who is exactly the kind of whatever they want to be? I wouldn't want to give up working or parenting—not even if money wasn't an issue; I want and need them both, even though balancing them can be a real biznitch.

Now that I look back at it, I was being crazy to want to go back to an office. Crazy! Crazy to long for the congested commutes and the expensive daycares and the terrible cups of coffee turning to muck in the office coffee maker. At the time, all I really wanted was more time away from my kids. But that was several months ago. And several months ago I had a two-month-old baby who was nursing around the clock, and my hormones were still going berzerk, and it was the dead of February. At the time I was feeling suffocated by motherhood.

Now I just think that that period with a baby who is around two to three months old is really, really difficult. For me it was. The honeymoon period of newbornness is over, but the baby is still slightly cross-eyed and eyelash-less and not doing anything much exciting. For instance, the fact that babies don't sleep through the night at that age isn't very exciting at all. Also not exciting: How wrecked your body is after a second baby. I was at a point when I was honestly second guessing my decision to have another child. I wasn't able to say that out loud at the time because it felt like such an ugly thing to be feeling.

Now it's all good. I mean, there are still tough days, and weeks when I don't feel like I even remotely kicked ass at anything, but that's OK. I am so blessed to have two daughters. How to work and mother from home efficiently has just been a big learning process. But on mornings like this one—still in pajamas, nursing my second cup of coffee, knees drawn up to my lap, baby napping—I just can't imagine a better work situation for me in all the world. I am so thankful for this arrangement and for all the lessons it's taught me about life and motherhood and me.

Things I've learned about working from home with kids, in no particular order:

1) If you don't put a bra on before 9 a.m., you're not going to put a bra on at all. I recently asked Nekos to remind me every day before he leaves for work to get showered and dressed myself. He cringed because he felt like it would hurt my feelings for him to say that, but I really do need help with this. I feel a bazillion times better about myself and am more likely to get things done if I'm dressed as though I were going into an office—albeit a very casual office. This isn't just about feeling good about the way I look; it's about self care, which is sometimes hard to come by when there are two little girls who also need to be bathed and groomed and dressed.

2) Some months are golden; some are scraping by. My experience with freelancing has been that there are months when I feel like I'm hustling for every dollar, and months when we're able to really apply a good chunk of change to our debt. (Getting out of debt is a huge focus for us right now.) One of the downsides to freelancing is that there is no X number of dollars that's always coming in, so I am learning not to panic during slower months.

3) Better not to put all your eggs in one basket. At this time last year, I was freelancing for just one company, and that was working fine because they were paying me well. Then, essentially out of nowhere, they lost some big clients and said they had no more work for me. When you work from home and lose your job, there's no severance pay. There's no face-to-face meeting where someone gingerly explains to you that your ass is grass. There was just one single solitary email, and all of a sudden I was out of a job. (And seven months pregnant ... but that's another story.) The lesson I learned from that is not to have just one job or one client but to have several. This leaves me feeling even more scattered, but also much more secure.

4) Multi-task. I actually hate multitasking. Being able to concentrate fully on something feels like such a luxury. But because I work for several people, I feel the most accomplished when I pick one or two tasks to complete for each client every single day. That way everyone gets some attention, and I don't fall hopelessly behind with any of my clients.

5) It's OK to put the T.V. on. My kids watch a lot of T.V., and I'm not going to apologize for it. It's often the only way I can get there to be utter silence for more than five minutes at a time. And when I need to get some work done, it's the most reliable babysitter I know. When I start to feel guilty about this, I try really hard to cut myself some slack. It's not like I'm shooting heroin in the bathroom while the girls are watching Mickey Mouse; I'm helping to earn a living for our family and doing the best I can. And later I will try to make it up to them with some good one-on-one imaginative play.

6) Change the scenery. Sometimes I have a big deadline and no childcare. When the deadline can't wait that means I may have a full day of work to do and two kids to entertain and nourish and nurture. In other words, there's no movie long enough to keep them out of my hair for as long as I need. In this case, we do a lot of moving around the house. When Tessa is getting listless, I suggest moving to a different room—or going outside—to play, or even driving to a kid-friendly coffee shop. My laptop comes along with us of course.

7) Ask for help. Especially with the second baby, I've learned to ask for help more. I ask for help getting the groceries out to the car now. I take the kids to drop-off daycare when I have to. And I especially try not to be heroic about how long I can stand to spend one-on-one time with my three-year-old. She has a huge personality and can be really trying. I'm a much better mom to her when I get to take regular breaks. Putting childcare in our budget has made all the difference; she goes to a mother's day out program from 9-2 Monday through Thursday, and it is the best thing ever.

8) Explain your job. A few weeks ago it occurred to me that Tessa has no clue what I do for a living. She has a vague idea of what Nekos does, and sometimes she goes to his office so she can picture exactly where he is throughout the day. But she only shook her head when I asked her, "Do you know what my job is?" "I'm a writer," I said and explained a little further. Now, when I need to work and she is wanting me to play with her, I tell her, "I have some more writing to do first," and it really has helped her be more respectful of my time on the computer.

9) Don't be stupid about taxes. For the past two years, I have been so dang demented about socking away the tax dollars on my freelance income to pay the tax man. I've finally figured out that 25 percent of everything I make has to go immediately into savings and never, ever be touched for anything but taxes. Being responsible about this will be a huge gift to our family come April 2014.

10) Be honest. I struggle sometimes with being resentful of Nekos because he gets to go off to work and concentrate all day on his career in the complete quiet of his office. That's ridiculous, of course, because working in an office can also totally suck (hello, pointless meetings...), and he doesn't get to pepper his days with craft projects and lattes with friends and cuddle sessions like I do. I don't really want to trade places with him. Still, I can't deny the fact that I feel this way sometimes, even though I am so grateful that because of his job we have health insurance and more security than we'd ever with my freelance work. Another thing that nags me is feeling lost or adrift. Since I don't have an office to check in with every day and no one position to put on my resume, I get anxious sometimes about where my career is going. Talking about the uglier emotions is helping me work through them.

So, I think that's about it. It's taken me a while to write this post because it's important to me and because I don't feel like I have it all figured out by any means. In fact, the thing I still struggle with the most is not letting social media distract me from my work. Especially because I sometimes have some extremely dry assignments. Any suggestions for this?