10 Thoughts on a Year of Breastfeeding. 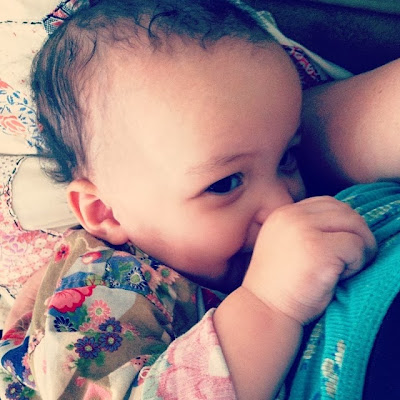 I breastfed my first baby for five weeks. They were five of the worst weeks of my life. When it was over, I was inconsolable. I spent the next year or more feeling like a failure. More so than I have about anything else in my life. Even though I knew rationally that it was totally, completely fine that I couldn't make the whole booby-milky-mommy-nom-noms thing work, I couldn't feel that. All I felt was so sad, so defensive, so regretful. There were times when I looked at baby Tessa, with that satin pile of curls and those eyes that simply devoured me, and cried and said, "Oh, baby, I'm so, so sorry. Mommy is so, so sorry." It was so silly. I know that now. And I even knew that then. I knew that it was insane to beat myself up about it. But I beat myself to a pulp. And I made up my mind that I was gonna friggin' breastfeed my second baby come hell or high water. It has been said that I only had a second baby so I could breastfeed him or her. That's not entirely untrue. Before I had my second daughter, Livvy, I informed more than a few people that I wanted, and deserved, a "do over" with nursing. I got that chance a year ago this week. Here are some of my thoughts/notes on nursing my second daughter for a year:

1) The research. When I was pregnant with Livvy, I read far less about fetal development and childbirth and concentrated instead on studying up on mammary glands. I read Ina May Gaskin's Guide to Breastfeeding from cover to cover, poring over the textbook-style photos of naked boobs with babes attached to them in various positions. I read lots about my first baby's condition--tongue-tied-ness--and about my own postpartum condition--postpartum anxiety. I got prepared. If breastfeeding and postpartum anxiety are the perfect storm, I spent all nine months stocking my storm shelter. I also read and admired books that rhapsodized about breastfeeding in a relaxed, not fanatical way. Like Great With Child by Beth Ann Fennelly, who I recall writing about how a braid of her milk sluiced into her daughter's rosebud mouth. Something like that. Something that made breastfeeding sound just as poetic and possible as it could be. These books were so important for me.

2) The chats. At last, I lightened up about the whole breastfeeding thing. I had lots of conversations with girlfriends--mothers or not--who confessed that they didn't, in fact, think that breastfeeding was the bee's knees. They variously thought it was weird, perplexing, overwhelming, and overly difficult, even impossible; these were perspectives and opinions I needed to hear after drowning myself in the misery of online forums, where everyone knows that breast is best and formula is arsenic and you couldn't possibly love your baby if you put her to sleep by tucking a plastic nipple between her lips.

3) The tenacity. I kept at it. In the beginning, when there were scabs on my nipples. And in the middle, when I was breastfeeding in a car, in a coffee shop, in a bathroom, in a bar, at a festival, at a funeral, on a plane, while I was peeing, while I was eating, in the middle of the night, before dawn, every hour on the hour. And when Livvy was nine months old and I went to San Francisco for four days without her, I pumped for four days. And it totally sucked. And it was humiliating. But I wasn't ready to be done. And I'm so glad I stuck it out. Even though I will never forget pumping in a handicap stall at the Phoenix airport, and I will never forget my best friend watching me pump--the slurp-slurp sound, the grotesque mechanics of it--and proclaiming it so weird. One of the things that struck me the hardest about "failing" at breastfeeding with my first child is that there was no second chance. Once the well had run dry, it was all over. I was so used to being able to have a second go at things, to go away for a bit, have a good night's sleep, return and make amends, and get started anew with something. The second time around I knew full well that when the milk was gone it was gone for good so I had better be sure I was ready to let it go when I did.

4) The veterans. I found it invaluable to have a few girlfriends, seasoned at breastfeeding, who I could call, email, or pull aside and ask assorted questions. Things like, "So.... should I still not be having my period?" "Should the baby really be this distracted during a feeding?" Every baby is different, as is every nursing relationship. But comparing and sympathizing with real women was important for me.

5) The being there. From around four or five months old, Livvy has been an incredibly distracted and squirmy eater, which is why I started supplementing with formula around then. The only time she is insanely into nursing is when she's deliriously tired. Which means that our best nursing sessions happen before nap times and bed times and in the middle of the night. These are the times--in the inky darkness, with just the tick-tock of the clock and the creak of the rocking chair, that I can really relax and drink up the fleeting pleasure that is nursing my beautiful baby girl.

6) The sensuality. I fear I will never feel as feminine as I have while nursing my daughter. My body right now is still a mess. It's wobbly and messy and luscious and voluptuous and squishy and there are three silvery vertical stretch marks on my lower tummy--and I wore exercise shorts and a tee-shirt on a canoeing trip this summer because I was too embarrassed to put on a swimsuit--but I have loved this body this year. It's been generous and benevolent, and I am grateful for it. (Maybe especially now that bikini season is over.)

7) The reactions. Thankfully, I haven't had any problems with strangers deriding me for nursing in public. Probably because I didn't do a whole lot of it and never uncovered. (I made an art out of knotting swaddling blankets around my neck and nursing Livvy discreetly in East Nashville coffee shops.) When anyone did notice, I took some small pleasure in their reactions--a little squirmy and shifty, a little starry-eyed and nostalgic. It seems the sight of one nursing woman makes every other mother recall her own experience, for better or worse. I've loved hearing their stories, and I've welcomed them, especially since I've known both sides of this coin.

8) The culture. Even though I had a great experience nursing this time and am thrilled to have been able to do it, I still say that the breast-is-best people need to shut their fat mouths immediately and go find something better to do with their lives than shame and bully other moms. The Nipple Nazis, especially those in anonymous online forums, are some of the cruelest pieces of shit I have ever come into contact with. To so much as infer that a new, formula-feeding mom is doing anything less than loving her baby as best as she possibly can is almost criminal. It's hard enough to learn how to be a mother without being told from the very beginning that you're doing things all wrong.

9) The golden ticket myth. My first baby got sick a lot. During her first year of life, she had several ear infections and frighteningly high fevers and an incidence of projectile vomiting, and she became quite familiar with the pink goo known as amoxicillin. Each time she got sick, I blamed myself. My second baby has gotten sick, too. Not quite as frequently or as severely--though that may be unrelated to breastfeeding--but enough so that I feel reassured that breastfeeding isn't the magic get-out-of-all-ailments free card that I imagined it to be. Most importantly, and what's come as the biggest relief of all to me: Baby Livvy is no more bonded to me than baby Tessa was. Breast or no breast, a mother loves her baby wildly, recklessly, endlessly.

10) The awesome-or-nothing factor. The first go-round, I thought that if I couldn't do breastfeeding "right," I just shouldn't do it at all. If I couldn't exclusively breastfeed. If I couldn't completely abstain from drinking or taking Benadryl or antidepressants or whatever the case was. This time, I've been way more relaxed and forgiving, less regimented and even more imperfect. I've supplemented with formula plenty. I've given Livvy bottles brimming with non-organic cow's milk, and I've heated those mo-fos up in the microwave. I've done the best I can. And, this time at least, it feels good enough. I thank God for the sweet mercy of a second chance.